An excellent smartphone will last for several years (at least), has a perfect camera, a beautiful screen, a long battery life, and is fast enough to do all the work, social networks, and games. Believe it or not, all of these things are easier to find on your phone than ever before-so, choosing the best thing is usually a matter of degree or preference.

Despite all these options, the traditional regular model is still a good choice. The iPhone 12 represents a development for the iPhone because it offers an improved design reminiscent of the beloved iPhone 5 and iPad Pro and nearly all the features as Pro models – something Apple hasn’t provided on the standard model in the past. Any selection you make is good because Apple has outstretched itself with this series of iPhone 12. You can work, play online games like Subway Surfers or online casino games, and watch videos in excellent resolution, the same on all models of iPhone 12. Choosing a smartphone from this plethora of iPhone 12 is only about preferences.

If the size is not an issue, then the best Android phone you can buy right now is the Samsung Galaxy S21 Ultra. This is an out-and-out choice with a large 6.8-inch screen and the best camera on an Android phone. In some cases, its camera can even surpass the iPhone 12 Pro Max. Camera improvements are colossal: a standard wide-angle lens with a 108-megapixel sensor, an ultra-wide-angle lens, and two different telephoto lenses. This makes it an incredibly versatile camera system, with plenty of advanced video features such as Pro mode and 8K recording.

After the disappointing Galaxy S20 Ultra in 2020, Samsung finally wins the name with its follow-up product, which provides almost everything you could want from an Android device. It is supplied with the latest Qualcomm Snapdragon 888 processor, which is the fastest processor on Android. If you prefer to use a stylus on your phone, it supports the S Pen stylus. The screen refresh rate is high, and scrolling is smoother. It also has a massive battery, and with that, this smartphone can be used effortlessly for two days. Samsung has updated the design of the S21 Ultra, and the metal rail naturally bends into the camera bump on the back. It is the best-looking big phone you can choose between the best phones right now if you are an Android lover.

Is the mobile phone that expands into a tablet computer the future of mobile phones? Is flexible screen technology ready for prime time? Let’s find out.

Galaxy Z Fold 3 is Samsung’s latest foldable product. Although it looks similar to the previous generation Fold, it contains some considerable changes. This year’s model is the first to provide water resistance. For example, Samsung stated that you should not worry about damage in the rain.

The new, more robust aluminum frame and Corning glass are more resistant to scratches and drop damage on the outside. The external display is now four times larger than the previous model and can reveal more information, such as calendar, weather, etc. Its folding screen has a higher refresh rate than earlier models, making smoother operations such as scrolling through websites. The phone also includes stereo speakers, and it also comes with an S Pen stylus. The stylus will automatically slide back into the pen casing, which may help prevent it from scratching the phone’s display. In addition, the S Pen can also be used to take notes, sign documents, and sketch on the phone. Galaxy Z Fold 3 seems to be improved in all aspects. Samsung has upgraded Fold models: slimmer, lighter, more efficient, more durable, and more affordable.

This smartphone looks marvelous, and it has an elegant design that is as attractive to business people wearing shirts and ties as small brewery owners wearing plaid. Combined with a powerful processor, excellent screen, and extremely fast-charging capability, you have an excellent all-around flagship product. The hardware design of the OnePlus 9 Pro is the most seamless and elegant phone the company has designed so far. It has a 6.7-inch screen that extends from edge to edge in a sufficiently narrow body that you can barely use with one hand.

For OnePlus, the impressive specifications are its proprietary charging technology. There is a 65W charger in the box, which can quickly charge the phone. The 4,500mAh battery of this phone is divided into two parts, which helps to accelerate the charging speed. After wireless charging, the following outstanding specification of the OnePlus 9 Pro is the 6.7-inch screen. The screen can go from 120Hz down to 1Hz, depending on what happens on display. OnePlus marks the touch response rate on the screen as “Hyper Touch”, and the clock frequency of some games is 360 Hz. More important is the screen resolution: 1440 x 3216 @ 525 PPI. You can keep it at high resolution and use a high refresh rate screen at the same time. These are the specifications on the screen, but the important thing is the experience.

Again, OnePlus has done an outstanding job in this regard. The reason for choosing the 9 Pro over the regular 9 is in some respects the same as the reason you chose a OnePlus phone instead of a Samsung phone in the first place: it’s just a little better than others, and it makes a bit difference in your pockets.

Huawei finally revealed all the information about its new P50 series in July 2021. Huawei P50 and P50 Pro have been released in China, but there is no other release news in other regions. Pre-orders opened in China on July 30, and the in-store date is August 12. The most significant design element of the P50 series is the rear dual-ring camera (this is to evoke people’s memories of traditional cameras). The Chinese company installed the lens into the two circles on the back of the phone. The size is slightly different, but the design of the P50 Pro is better, offering more colors and curved displays than the P50 flat panel display.

Huawei stated that this is a more minimalist design, focusing on these two “matrix” cameras. The big difference between the two devices is that the Pro has a curved display while the regular model has a flat display. That’s not the only advantage that the P50 Pro gets: this device it’s a little larger at 6.6-inches, and it has a faster 120Hz refresh rate than the 90Hz of the P50. In other words, both are OLED; both have similar resolutions, and both support HDR.

Huawei’s new XD Optics is the further essential information about the cameras on smartphones, which claims to reduce the amount of data lost when the list passes through the lens. Huawei is also talking about the camera’s color performance, saying that the color of your photos will be more accurate. Huawei P40 is the flagship phone of 2020, launched without access to Google services because Huawei continues to go its way. In 2021 a new champion wants to lead the trend of mobile photography again.

As I mentioned before, you should choose the best smartphone for you; in this case, it is only about preferences and what are you looking for in a smartphone.

Also, you may like to read about: Best Smartphones of 2019 and the Future Smartphone of 2021 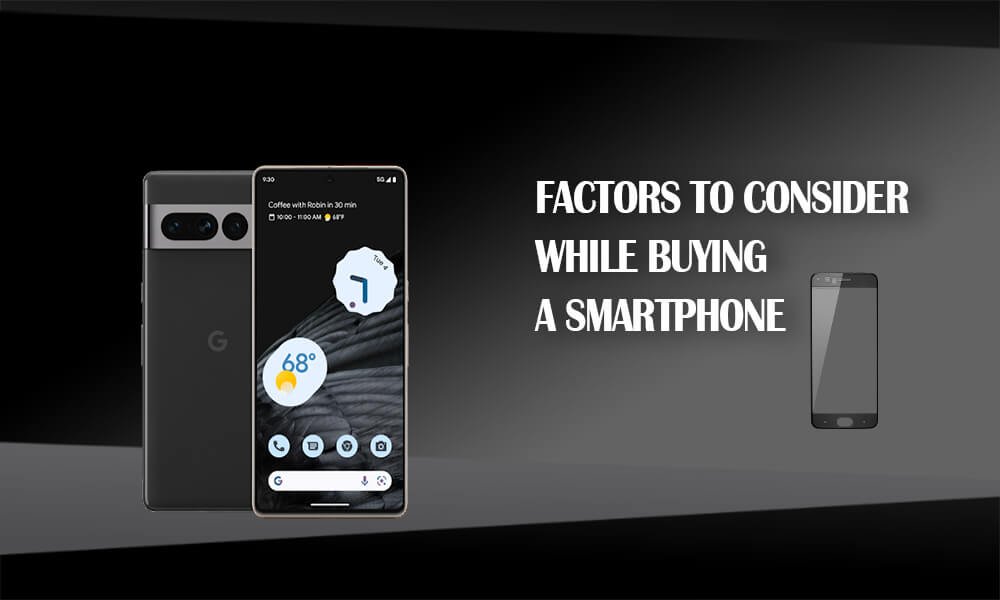 7 Factors to Consider While Buying a Smartphone